SABOC conducts research related to the structural analysis of biomedical ontologies and terminologies. Our core research topics include ontology quality assurance methodologies, ontology summarization techniques, ontology change analysis, software tools for browsing and visualizing ontologies and summaries of ontologies, and family-based structural analysis of biomedical ontologies. Our current research is funded by the NCI/NIH (R01 CA190779 "A family-based framework of quality assurance for biomedical ontologies"). Between 2006 and 2011 our research was funded by the NLM/NIH (R01 LM008445 "Partitioning to Support Auditing and Extending the UMLS" and R01 LM008912 "Taxonomies Supporting Orientation, Navigation and Auditing of Terminologies").

For the last 25 years we have conducted extensive research into structural and lexical techniques for uncovering errors in biomedical ontologies and terminologies. An overarching theme of our research is the automatic identification of sets of concepts that are statistically more likely to have errors. These sets of concepts are identified using various structural (and/or lexical) criteria. We have applied our ontology QA techniques on many important ontologies, including SNOMED CT, NCIt, GO, ChEBI, NDF-RT, Uberon, the UMLS, and Columbia's MED, among others. In our research we have made extensive use of abstraction-network-based ontology quality assurance methodologies, which we will describe below.

An ontology is organized as a complex graph structure, where each node represents a concept and the edges between nodes represent the relationships between concepts. Ontologies tend to be quite large and complex. For example, SNOMED CT currently contains more than 300,000 active concepts and over 1.5 million relationships. Diagrammatic presentations have long been used to display large, complex knowledge structures, including ontologies. However, the size of most ontologies makes understanding and visualizing their structure difficult. To support comprehension of ontology content, and to enable quality assurance of ontologies, we have developed structural summaries called abstraction networks.

What is an Abstraction Network?

Below we list some examples of abstraction networks we have created and applied to the ontologies in the NCBO BioPortal. 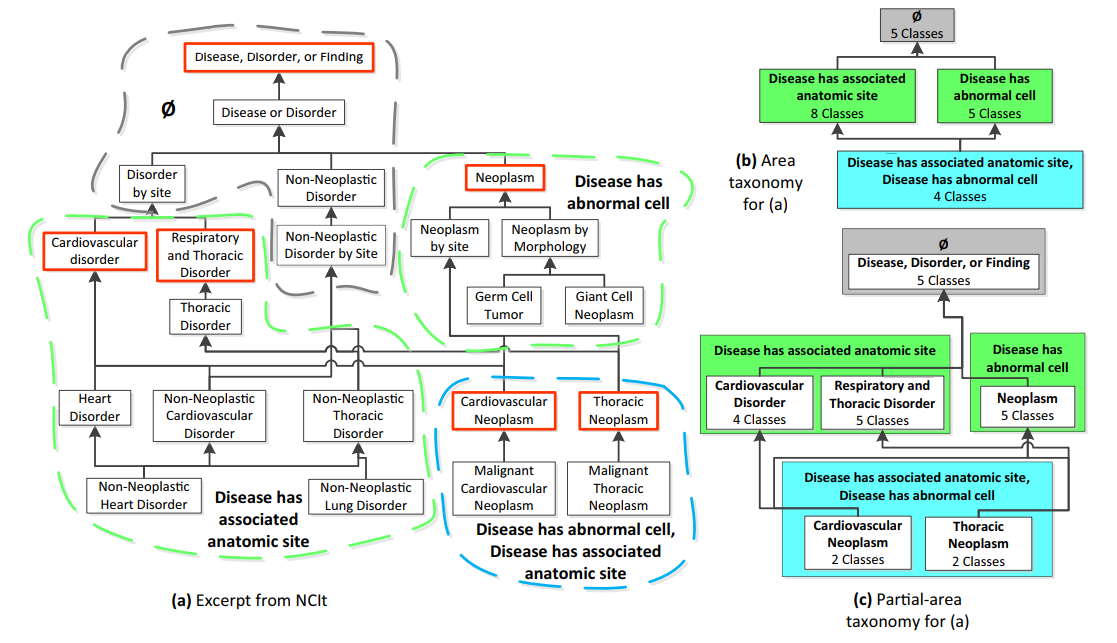 An example of an area taxonomy and a partial-area taxonomy created from NCIt's Disease, Disorder, or Finding subhierarchy.

How do we use Abstraction Networks?

By far our most extensive use of abstraction networks has been in the context of ontology quality assurance (QA). Fundamentally, an abstraction network serves to capture the essence of an underlying ontology while ignoring its minutiae. The nodes of an abstraction network identify sets of concepts that meet the same structural criteria. Among these concepts, we can identify categorizations that indicate complex or uncommon modelling, relative to other concepts in the ontology. Beyond quality assurance, we have also utilized abstraction networks to support comprehension of ontology content, enable automatic identification of major subject areas in an ontology, summarize and analyze changes to an ontology's structure, and investigate the structural complexity of ontologies.

4. Ontology Change Analysis Understanding how ontologies change across time is important for identifying, and understanding the cause of, errors and inconsitencies in their content. In our research we have developed several techniques to summarize structural changes in ontologies. Specifically, we have developed diff abstraction networks to capture the global picture of change between two ontology releases. Rather then displaying a list of thousands of changes, diff abstraction networks display a graphical view that highlights important areas of change.

An example of a diff partial-area taxonomy (a type of diff abstraction network) created from two NCIt releases. Changes to the introduction and inheritance of restrictions, according to their property types, are highlighted. 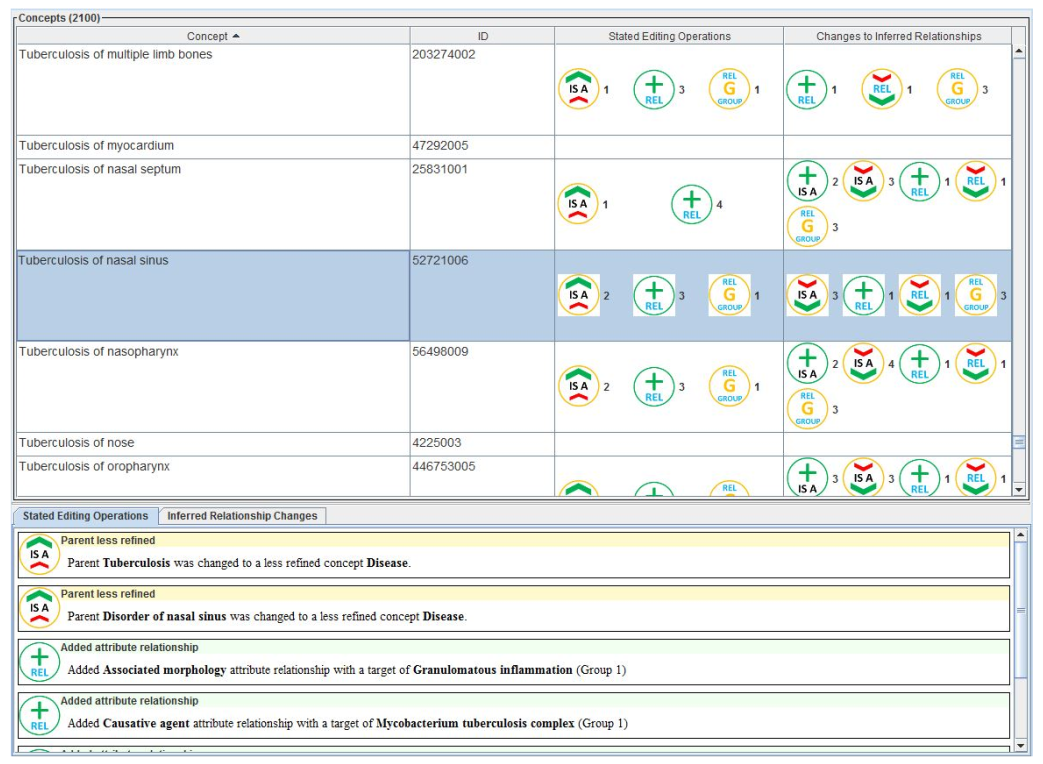 In a visual semantic delta a user can review individual changes to SNOMED CT concepts.

A major aspect of our research is the development of software for creating and visualizing abstraction networks. To support our current research grant we developed the Ontology Abstraction Framework (OAF), an open source software system that implements most of the research we describe above.

For more details on our software click here to view our Software page, which describes the OAF.